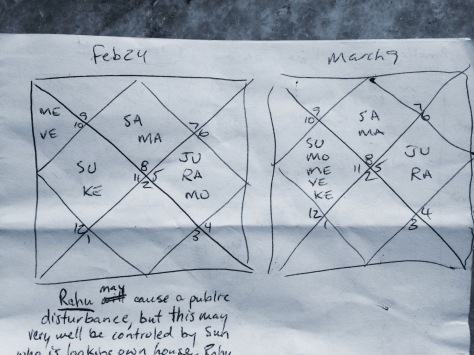 Rahu comes into the 10th house with Jupiter. Rahu will being some intensity to public life and a drive for pubic recognition. Jupiter, as owner of the 5th house transiting the 5th sign will bring extra energy to this desire for recognition. Since that fifth house is 8th from the 10th changes in career could come with some suddenness or unexpected. The Sun look on his own house should also be positive for 10th house thru his transit in Aquarius. Saturn is also looking at the 10th which is sure to take some of the joy from your occupation especially when the moon goes full in Leo late February.

Rahu can also bring some desire into the 2nd house which suggests a phase of gathering, collecting and saving; or at least the appearance of having done so. Rahu is always much more concerned with appearance than actual substance, though he does not deny accumulation of substance either. Rahu’s look at the 6th house will be driving the lower ego to be more challenging. It’s this 9th look on the 6th house that competes for a place in tenth house. Since Rahu is in the 10th house, the 2nd and 6th work to improve his 10th house standing. Perhaps trying to show a successful face to the world thru 2nd house and competing thru 6th house in order to gain in public recognition.

Ketu will be in the 4th house, transforming ones sense of home. But Ketu doesn’t work for change with the same intensity as Rahu; Ketu rather fills a person with ennui so that change comes thru a feeling of familiarity and already having known and done that. Ketu often shoes us the lessons we’ve already learned and have no interest in repeating. But he still cuts our ties to things in his own subtle way, especially when he’s associated with the Sun, who he will be eclipsing in early March, and Mars who will be looking at the 4th house from his powerful transit thru 1st house Scorpio. Changes could also come sudden to 4th house in a transformation way that leaves one unable to go back to the way things used to be.

Ketu affects the Moksha – Liberation trine here which could limit your peace of mind as you struggle and compete for Rahu’s indications. It might not be a great time for “letting go” since you’re likely to feel as though you’ve already experienced that path. Mars and Ket will also be looking at the 8th house of Gemini, and when Mercury conjoins Ketu in early March, one could experience some sudden events in the home and/or in ones emotional being. With Ketu’s involvement it’s possible you might accept these changes without being disturbed by them so much and Ketu can repress or negate ones emotional life. Ketu, like Rahu, can often give an appearance without the inner substance, so watch for insincere outpourings of emotion as well. Ketu’s 9th look at the 12th house can open up the dream world or at least give the impression that he has entered that world, but again, with been-there-done-that kind of attitude.

Saturn is seeking to limit the personality, dry it out and make one seem a little dry and uninteresting, perhaps a little reserved and traditional. His transit through a person ascendant often makes people appear older than they actually are (at least for the period of transit). Mars will be in his own house when he conjoins Saturn which will of course energize the personality, and perhaps his conflict with Saturn will add some mystique (Scorpio) qualities to ones personality at this time. Saturn’s 3rd look will help to give durable effort and could add a touch of duty to ones efforts. It’s also a good time to focus some effort on ones own self health since first house signifies these things as does the 6th house which is ruled by Mars who is also in the first house. Saturn and Mars are both looking at the 7th house which is sure to have a frustrating effect to trade, relationships, partnerships and other such things that people come together in agreement. Saturn’s 10th look will make you work hard in the tenth house things and could delay or change advancement of recognition from 10th house. This aspect will certainly make you work for what you want. This is one of the ways that Saturn shows us the things we really want. Thru failure we discover very quickly if we have the determination to try again for what we really want.

If you have any questions or comments, or would like a chart reading, you can contact me at Holliday.michael@gmail.com