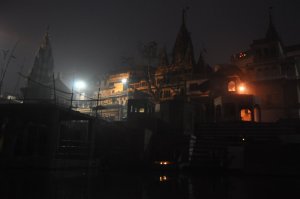 I just spent five days inhaling the smoke from the fires of dead people. Less than 100 paces from where I was staying is the burning ghat along the Ganges river. Over three hundred people a day are turned to ash there. I saw as many as 12 fires going at once. I rented a boat for an hour and the boatman explained that babies, pregnant women, and holy men are never burnt, their bodies are tied to a rock and they’re dumped in the river. It’s not uncommon for then to break free of their rock and find their way back to shore where, as I soon found out, the dogs and the birds have a feast until the next morning when a dalit (an untouchable) comes along and dumps them back in the middle of the river. The alleyways of the old city that hug the ghats which hug the river are narrow and filled with market stalls, cows, goats, many people, and processions of chanting funeral goers with bodies on their shoulders. 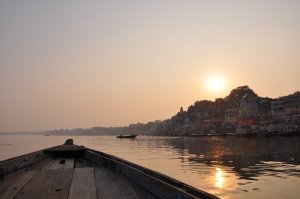 Varanasi is the holiest city in India. It’s also most likely the drug capital of India. Everything is available here: opium, hashish, and bhang (pot) are the most popular, though I was told that the man I nearly punched-out was most likely high on heroin.

Varanasi is like a resort town. Tourists everywhere, merchants happily trying to sell their wares, and helpful english speaking locals everywhere to ensure us tourists don’t get too lost in the alleyways of the old city. You can lie under an unbrella and get an aruvedic massage for Rs400, sit on the steps and enjoy a “special lassi” (keeping in mind that I said it was the drug capital), or just stroll around enjoying the many mini-festivals and the beautiful, unpretentious women.

Varanasi was indeed a lovely resort town of death. 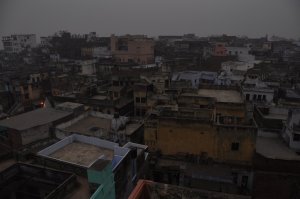